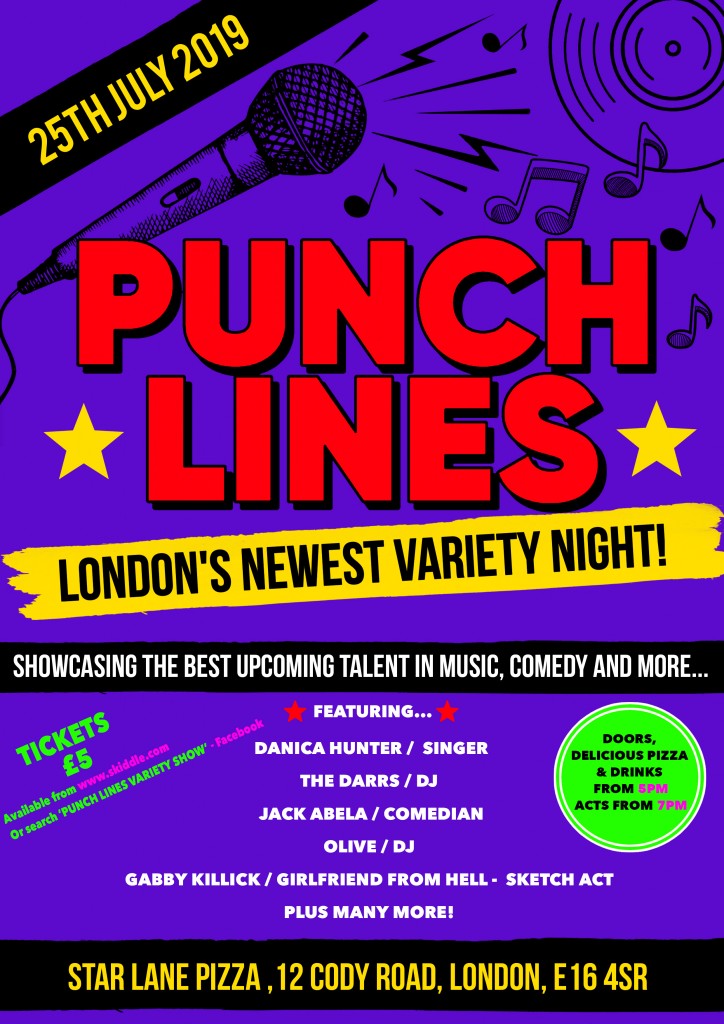 PUNCH LINES!
A comedian will tell you a punchline is the final phase of a joke. We’re reclaiming it as the latest dance move everyone’s doing. So whether you’re PUNCHing the air, laughing at our LINES or doing your own … this is the night for you!
Come and join us on Thursday 25th July and watch London’s newest variety show!
We’ve got everything from Singers, Comedians, Dancers, Poets, Magicians , DJs and More!
Featuring…
DANICA HUNTER / SINGER
Danica Hunter is a London-based British singer/songwriter, experimenting with quirky fusions of soul, pop, hip hop, jazz and other genres. She’s already played Reading & Leeds Festival on the BBC Introducing stage. Fresh off the plane, back from completing a tour in Spain and now ready to debut her latest EP Morning Star!
GABBY KILLICK / GIRLFRIEND FROM HELL / COMEDIAN SKETCH ACT
Gabby is an actress and comedian currently on tour with her award winning Edinburgh Fringe comedy show ‘Girlfriend From Hell – The B!tch Is Back’. Gabby will be previewing the show with us just days before she heads back up Edinburgh Fringe again this August! The show includes life hacks on today’s dating and partying scene, giving top tips on how to walk when you’ve taken too much ketamine and sharing the belief that’s its never too early to start stalking your boyfriend.
TOP 3 SHOW – Funny Women Awards
TOP 10 SHOW – Edinburgh Evening News
Birmingham Best Newcomer
JACK ABELA / COMEDIAN
Jack is a young comic from Brighton, trying his best to get his little legs over life’s hurdles – He was a finalist last year in the prestigious national comedy competition So You Think You’re Funny 2018.
The Darrs / Olive / DJs
And it doesn’t stop there, we want satisfy your itchy feet so we’re being naughty and bringing in the DJ’s. Olive and The Darr Brothers are going to the decks to start your weekend early!
Plus many many more!
This is an event you don’t want to miss!
Doors, delicious pizza and drinks from 5:00pm
Acts from 7:00pm!
£5 Entry
For tickets –  https://www.skiddle.com/whats-on/London/Starlane-Pizza-Bar/Punch-Lines-/13568007/