Gabriele Killick, a second year student at Birmingham School of Acting, will be performing her own stand up show at the Edinburgh Festival Fringe this weekend. 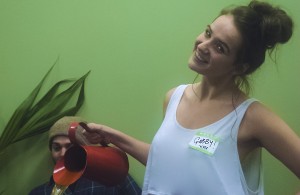 Opening on Saturday 2 August and running until 9 August, ‘May I Take Your Order’ is a bitter sweet comedy that lifts the lid on the life on an impoverished student actress struggling to live the dream, featuring three comic creations – the wannabe actress, a despairing Welsh mother and a Liverpudlian man-eating best friend.

20 year-old Gabrielle, from Datchet in Berkshire, said: “Ever since starting at Birmingham School of Acting, part of Birmingham City University, it’s been my ambition to take my own show to the Edinburgh Festival Fringe.

“This is such an amazing adventure for me. I’ve spent the last year devising the show and hope people are intrigued enough to come and see it.”

The Edinburgh Festival Fringe is the largest arts festival in the world and takes place every August for three weeks in Edinburgh, Scotland’s capital city.

Every year thousands of performers take to hundreds of stages all over Edinburgh to present shows for every taste. From big names in the world of entertainment to unknown artists looking to build their careers, the festival caters for everyone and includes theatre, comedy, dance, physical theatre, circus, cabaret, children’s shows, musicals, opera, music, spoken word, exhibitions and events.