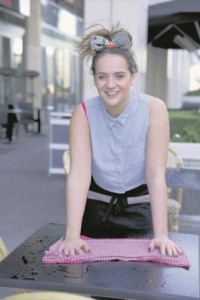 A PLAYWRIGHT is ready to seek her fortune at the Edinburgh fringe this summer, after a successful debut at Windsor Firestation last Saturday.

Gabrielle Killick wrote her one women show, called ‘May I Take Your Order’, over the last year and is ‘excited’ to take it on tour.

The 20-year old former Windsor Girls’ pupil said: “Ever since first studying drama at Windsor Girls School, it’s been my ambition to take a show to the Edinburgh Festival. This is such an amazing adventure for me. I just hope people are intrigued enough to come and see it.
“Mainly so I don’t end up bankrupt and on the streets. Equally that could give me great material for next year.” The Datchet actress will perform at The Space on The Mile, Radisson Hotel, daily at 7pm from August 2 to 9 and tickets cost £8.